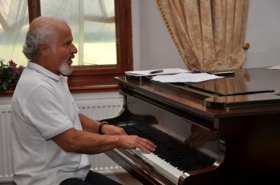 He was born in Lucca, Southern Italy. He studied vocal studies at the conservatory in Geneva and at the Music Academy in Osim. His voice qualities were enriched by the famous tenor singer Mario del Monaco and the well-known professor Ettore Campogalliani. As a teacher he had a huge impact on Mirella Freni, Luciano Pavarotti and Renata Tebaldi. Antonio Carangelo made his debut in Great Theatre in Geneve. He stood out as Verdi´s Ernani in New York. This outstanding performance gave him many opprortunities to star in opera houses all over the world.

Recently he focuses on performing and pedagogical activities as well. He established Carangelo Belcanto Academy in Wien, attended by young singers from Europe and America. His students are soloists at State Opera in Wien, La Scala in Milano, Covent Garden in London, Teatro Colón in Buenos Aires etc. Since the year 2007 he has been a member of MPSAD´s jury in Karlovy Vary.