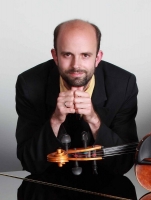 Kamil Žvak was born on 9th March, 1981 in Vsetín. He started to learn violoncello at the age of six under Mgr. Zdeňka Pimková at local Music School. Then he continued his studies with the same professor at P. J. Vejvanovský Conservatory, Kroměříž (1995- 2001), finishing his studies at AMU, Prague under prof. Miroslav Petráš (2001-2006).

After graduating at HAMU he was a member of the Prague Radio Symphonic Orchestra and teacher at Music School in Hostivař.

He has been playing Tomáš Haškovec´s violoncello from 2003.